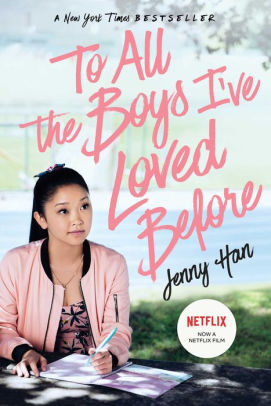 In honor if it being one week since the movie adaptation of To All the Boys I’ve Loved Before released, I wanted to post some of my thoughts! I participated in a readalong hosted by Flavia (which was tons of fun!!) so I finished the book just in time for the release. However, because I’m the worst and I’ve been so busy packing to move into college, I just finished writing my review yesterday haha. Since I haven’t had the chance to post it on here yet, I thought I could share some of my thoughts about both the book and the movie!

**This is mostly spoiler-free but there are a few exceptions. If you want to avoid spoilers, just skip the red text from this point on!!

This was a cute, fluffy contemporary romance and a quick read. I didn’t want to put this book down because I was constantly curious to see what would happen next.

Lara Jean has written a love letter to every boy she has really cared about as her way to say “goodbye” to them and move on. When her letters get sent out, she’s horrified. This would be embarrassing enough for any teenage girl, but to make things worse one of the recipients is Josh, her older sister’s long term boyfriend. In an attempt to make Josh believe she’s over him, she starts dating Peter, a former friend who’s looking to make his ex-girlfriend – and the most popular girl in school – jealous. Lara Jean starts to get confused when she realizes Peter is nothing like he seems and they have a much better time together than expected.

One of my favorite aspects of this story is the family dynamics. Lara Jean’s older sister, Margot, has taken on a lot of responsibility since their mom passed away years earlier. Lara Jean really admires how smart and strong Margot is and strives to be like her. When Margot goes off to Scotland for college, Lara Jean feels a lot of pressure to take on Margot’s responsibilities. She wants to take care of her younger sister, Kitty, the way that Margot always took care of her. All three girls do their best to make things easy for their father, Dr. Covey, who is a very busy doctor, as well as make sure he has plenty of company.

Lara Jean is a likable protagonist. She’s creative and caring and she has good intentions. She did frustrate me at certain points because I knew the choices she made were going to further complicate things. However, I tried to keep in mind that this helped develop the plot. I also realized that I had to understand that she was still in high school and was new to relationships.

I wasn’t a huge fan of Margot. While she does play an important role in the story, I thought she was kind of stuck-up and unfair to Lara Jean. She always made herself out to be so perfect. She also put a lot of pressure on Lara Jean to be perfect. Then she goes away to college and it seems like she’s too busy to talk to her family much. But then at the end, she tries to make Lara Jean feel bad for living her life while she was gone. Two other things she did that bothered me were being very unsupportive of Lara Jean’s relationship with Peter even though she expected Lara Jean to see Josh all the time when they were dating, and keeping the fact that she had sex with Josh a secret from Lara Jean.

Kitty is my absolute favorite character in this novel. She’s just a little ball of sass. Most of the time that I was laughing out loud, it was because of Kitty. I love the way she and Lara Jean joke around together. I also thought it was cute how much she liked Peter and Josh. And of course I was rooting for her to get the dog she wanted the whole time!

Dr. Covey was an awesome dad. He was corny and a little naive but he really did everything he could to make his daughters happy. He was very supportive of them and tried his best to fill in for their mom, even if it meant having awkward sex talks with Lara Jean haha.

Of course I couldn’t write a review of To All the Boys I’ve Loved Before without talking about the boys. At first I kind of wanted Josh to like Lara Jean back because she really cares about him and who doesn’t want the protagonist to get what they want? But then I realized how wrong it would be for both Lara Jean and Josh to betray Margot that way and I didn’t want it to happen. On the other hand, I wasn’t a huge fan of Peter at first but he grew on me a lot. He definitely made a lot of stupid decisions and he was far from perfect, but I do believe he really began to care for Lara Jean. My main concern with them getting together is that he obviously also still cares about Gen and that’s not fair to Lara Jean.

The ending left me really eager to read the second book. I can’t wait to see how everything works out. I really enjoyed the book overall and would highly recommend it to anyone who’s in the mood for an adorable, easy read!

I loved the book and movie equally for different reasons. I love all of the important scenes and character development that were included in the book, and I love the way the characters were portrayed in the movie. I really felt a connection between Lara Jean and Peter in the film and I loved that. I’m so happy this movie adaptation was made and I really hope they also turn the other two books in the trilogy into films!!

Did you read the book or watch the film? What did you think of Lara Jean and Peter’s relationship? If you did both, do you prefer the book or the movie? If you haven’t read or watched To All the Boys I’ve Loved Before, are you interested in the story?